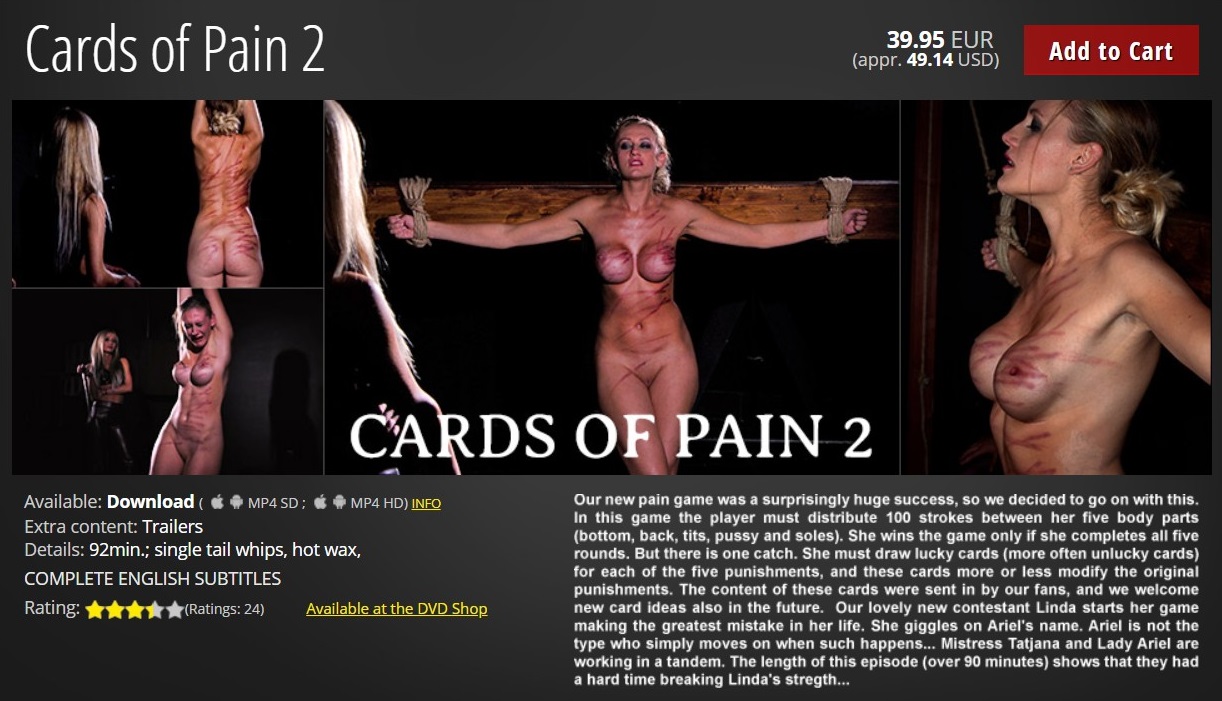 The rules are simple. Linda must suffer 100 strokes altogether, she has to divide them onto 5 body parts. Ass, pussy, soles, back and breasts, she gets to choose the # of strokes each body part will suffer, she may select whichever body part she wants at the beginning of each round in whatever order. For each body part, she must select a “lucky” card that will in some way enhance the punishment she will receive.

Before the first round begins, Linda makes the incredibly stupid decision to make a mermaid joke about Ariel, this backfires spectacularly!

Note: before the first round actually begins, Linda drew a “Save” card for the 15 she was supposed to suffer on her feet. This meant that she did not actually have to suffer any punishment for that round. So for all effective purposes, this round didn’t count at all.

Pussy: 15, Lucky card: Candle. Instead of 15 pussy lashes, Linda has to suffer 15 drops of hot wax on her pussy. It’s not a particularly interesting round, but she is very expressive in her reactions. A decent warm-up to the far more intense rounds to come.

This is where the action really starts to pick up from the rather tame 1st round; things get very intense here, very fast. Linda told already that she feared breast whipping the most and her reactions showed. She immediately sobbed and whimpered in fear as she now had to suffer 30 lashes on her breasts instead of 10.

And then went from this

She only just survives the round and spends much of it bent over grimacing and moaning in pain.
Round 3:

This round was so intense it may as well have been the fifth round. Even halfway through she was barely able to stand and sagged in her restraints. She struggled so many times to count and earned herself an extra few lashes. Even from the first few lashes she grimaced and howled, and at the 20th lash, she was choking and gasping for air, taking several seconds to count. By the end of the round, she sounded like a puppy that had been kicked a hundred times with a steel-toed boot and her entire body slackened with only her restraints holding her up. Ariel and Tatjana’s utter demolition of the dear girl was complete. Truly an outstanding AoH scene!

In this round, Linda’s fear of breast whipping was still very evident, both Ariel and Tatjana exploited it. At several points, they both demanded she turn around, Linda begged and pleaded but was always denied mercy. Truly both dominas did an excellent job of tormenting her and reducing her to an utter sobbing, mewling shell of a human being.

Disclaimer Alert! If you couldn’t handle the clit piercing scene in CoP1, STOP HERE! Don’t even presume to watch any further than the 3rd round, just turn the damn clip off! You’ve been warned!
Tatjana and Ariel made an excellent pairing as they used teamwork to utterly demolish Linda physically and mentally. They mocked and taunted Linda & bossed her around left & right, they showed her precious little mercy. This was Tatjana’s first time with femsub and she was terrific, she was calm, cold & utterly condescending. Tatjana is like an upgraded version of Ariel, sexier, classier, more mature and possibly even crueler. Both ladies behaved as dominas should, with total indifference to their victim’s plight!

The final interview …well, indisputably the most disturbing and upsetting moment in Mood or EP History thus far. It’s certainly more intense than the clit-piercing scene of Lucy. Most devastating of all was when the host revealed the final lucky card, at that moment it became all the more tragic for Linda! It really sinks in just how monstrous the whole ordeal was for the dear girl and just how much easier it could have been for her.
For this film, effectively there were three rounds of punishment: 15 hot wax drops on pussy, 30 breast lashes, and 90 full body lashes. The final round and the aftermath were so intense and severe that it was like observing a case study in human cruelty and desperation. EP has made several films with savage whippings/canings, but round 3 stands out for not even the intensity of the whippings, but for the sheer brutal effect it had on the victim.

The first round was nothing special, but the later 2 rounds more than made up for that! Absolutely worth your money… if you have a heart of stone. 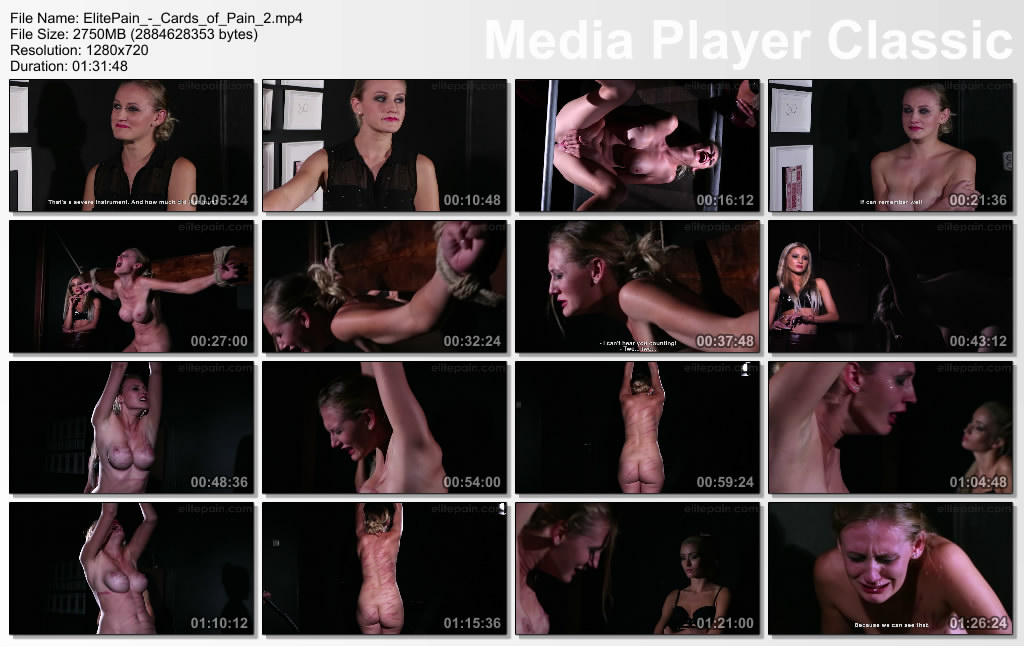