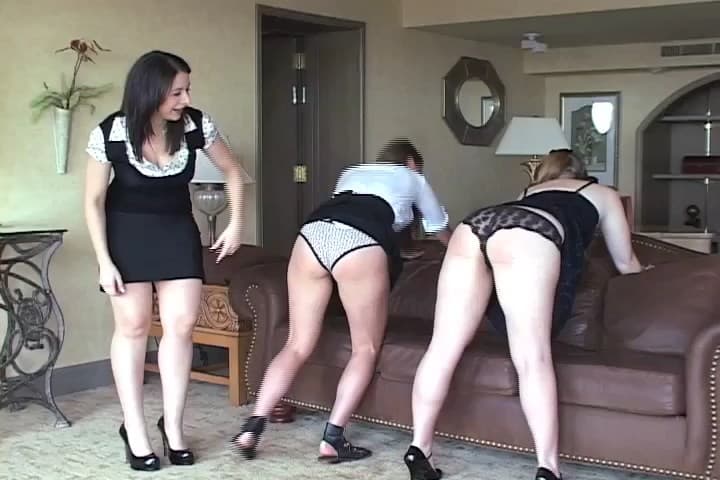 Sarah is chaperoning her cousins Joelle and Christy on a tour of potential colleges, bankrolled by their Uncle Penwyn. The younger girls are acing their interviews, but all three women manage to infuriate their benefactor by going out drinking and twerking until all hours one night, then posting a video of their vigorous bottom shaking adventures on the internet, which instantly attracts the notice of their stern Uncle, who calls Sarah with instructions to “Spank them and keep spanking them until I get there!” What he doesn’t realize at that point is that it was Sarah who taught Joelle and Christy to twerk in the first place. Amazed that her younger cousins don’t know how to twerk, Sarah demonstrates her own dynamic, buttock gyrating techniques and then tests them on what they have learned. Making both girls bend over and thrust their bottoms up in the air, Sarah instructs them on how best to shake their beauteous booties and sway their silken hips. On their uncle’s instruction, Sarah takes Joelle across her lap and spanks the beautiful brunette’s taut, trim bottom with hand and hairbrush until the slender coed’s shapely oval cheeks are blushing dark pink. Obediently carrying out their Uncle Penwyn’s orders, Sarah turns the voluptuous Christy over her knee to punish the younger girl’s plump, luscious backside with her hand and a solid wooden hairbrush. Sarah tells both girls they must also take a caning, pretending to be sorry that she is the one who has been designated to discipline them, but secretly relishing her power over her cousins’ vulnerable bottoms. There is something about Joelle’s bottom that begs for the bare hand. But this is just a prelude to her caning. Bending slim nymph Joelle over, Sarah bares the brunette’s sexy bottom again and this time applies both a stinging straight cane and a twisted carpet beater to Joelle’s satiny skin. A strict, disciplinary caning is then duly administered to the erring college girl by her older cousin. That Joelle is really feeling her punishment is never in doubt. Now it is Christy’s turn to be bent over and subjected to the harsh kiss of Sarah’s two favorite canes, the straight rattan and the twisted carpet beater. Christy’s ample backside is burnished a dark shade of rose by Sarah Gregory in this scene. Christy’s reactions are fantastic! After disciplining her charges, Sarah has the girls bend over to examine their bottoms post spanking. They are very pink, but will the color last until Uncle Penwyn arrives? Uncle Penwyn (Keith Jones) arrives and expresses his anger and disappointment at the cousins for behaving so badly during the college interview tour he has financed for them. Solemnly informing them that they will all be spanked, and Sarah especially severely, for being the oldest and thus most responsible for their group actions, he begins by turning bouncy, luscious Christy Cutie over his knee and making her ample rosy seat red hot with the palm of his very hard hand. Christy squeals and cries with pain as Uncle Penwyn continues to resolutely discipline the naughty girl. Joelle is next to go over Keith’s knee. The slender brunette, so attractive in her mini skirt and open heeled sandal booties, has no chance of softening her Uncle even with her most sincere protestations of better behavior to come. She is spanked soundly, just like her cousin, and made to repent her decision to so naughtily twerk in public. Now it is the instigator’s turn to be punished over her uncle’s knee. Sarah has hitherto enjoyed her position of authority over the younger girls, but she has also tempted them into disgraceful behavior and participated in same herself, and what’s more, she was the one to post the notorious twerking video of them all online. Uncle Penwyn is most disappointed and angry with Sarah and reserves the longest, hardest spanking for that shapely brunette. No longer the bossy top girl in charge, Sarah kicks and cries real tears as her vigorous bare bottom spanking continues until her Uncle is satisfied she has learned her lesson. Sternly administered, yet caring discipline, hallmarks the entire punishment session of all three women under Uncle Penwyn’s capable hand in Shadow Lane’s Spanked for Twerking.