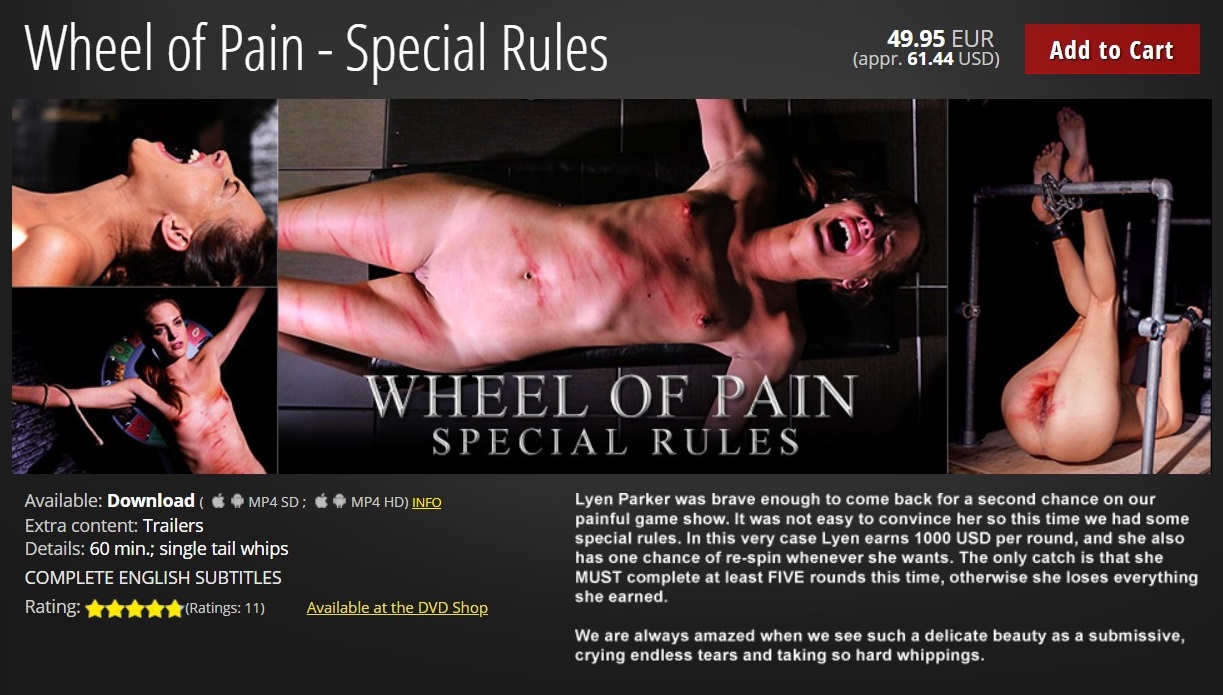 Wheel of Pain – Special Rules Review
Lyen Parker returns for her second wheel of pain episode, this time the rules are indeed special. She must complete at least 5 rounds or no money at all and she has a one-time option to respin the wheel if she dislikes what she spun the first time.

Round One: Lyen’s cheerfulness and smile are erased as she spins 50 full body lashes. She is bound lying on her back, stomach up.

Round Two: Lyen spins 25 lashes on her thighs; she is bound standing up with arms tied to two poles facing Ariel and the Camera. Before the whipping begins, Lyen begs for mercy and Ariel laughs in her face.

Round Three: Lyen gets 30 lashes on her pussy….with a strap…after she spun the wheel she sighs and her body language indicates that she doesn’t seem so confident now. She is bound on her back, arms chained at her sides with her legs resting up above her pussy on a padded bench. Ariel’s reactions in this round are notably colder and more determined….(she is going back to the ice-cold executioner from ML 3 &4).

Round Four: Lyen initially spun 30 on her pussy again; she uses her respin option and earns herself once again 25 on her thighs. She is tied on her back legs up bound to a metal frame. Needless to say that this is the round where Ariel pulls her nasty little trick to make Lyen quit. Again Ariel looks less sadistic and just more cruel and determined.

Impromptu Scene: What is featured here is comprised of simple raw human suffering at its most base level. This is the scene where you know you are a monster (if you enjoy it) or human if you feel your heart breaking for her.

Round Five: Lyen spins 25 lashes on her breasts. (After you watch the impromptu scene you can imagine what kind of state she is in by this point).

The second round and the fifth are what make this film a must-buy. Lyen pleads for mercy and Ariel cruelly denies her before she flogs her thighs harshly!! And in the fifth round, well our poor submissive must be superhuman even to continue up to that point. I must warn the viewers that her reactions to the whip are so extreme in that round they should be included on an exam to test for psychopathy.

This film was simply superb, the finest wheel of pain to date and one of Pedro’s best films. This film is so-near perfect that it is the “Martial Law 3” of Elite Pain films.

Lyen’s reactions to the whip were simply outstanding, especially in the second and final rounds. To be fair, anyone who had gone through what Lyen had endured would have reacted in a similar manner……but Lyen’s tears flowed like a river (in the fifth round) and the way she looked up to the ceiling as though praying for some savior to burst from the heavens and rescue her……Excellent! Lyen seemed to be in a very good mood before she spun the wheel, it was a real pleasure to see that cheerfulness evaporate as she spun 50 full body lashes. Also, before the second round, when she spun 25 lashes on her thighs right after being lashed on them previously and she knew Ariel was not going to spare her…..she nearly burst into tears even before the whipping began! Fans of extreme reactions and emotional distress will adore this film.

Ariel…..she was on fire here, a real treasure to watch in this film, her sadism, taunting Lyen and smirking in her face at the start of each round…..Evil! I admit after watching that cheap trick she pulled to make Lyen quit in the fourth round, and then watching her stone cold face as she admired her handiwork (during that impromptu scene) I was torn between admiration and wanting to strangle her. And after the final round is over and Lyen has (somehow) managed to last through her 25 lashes on the breasts…..Ariel smiles and yet again admires her handiwork, her eyes light up and you can observe them glitter with pure sadistic glee!! She and Lyen are the dynamic duo and I sincerely hope that if Lyen does make a final film that Ariel dominates her and cruelly pushes her limits to the max.

Indeed the only major “faulty” issue was that the position used in round one, where Lyen is tied on her back for full 50 body lashes was simply the wrong one to use. While Ariel did her job well and lashed Lyen from top to bottom on her front very harshly….that position was simply not the right one….in my opinion…..it simply doesn’t do the whipping justice…..that position should be used for back and ass whippings only. Total body whippings should always be done with the victim standing!…..way more entertaining to watch! (Or Lyen should have at least been turned over on her stomach). The domina gets to choose where to whip the victims in that case, yet it must be Pedro who chooses the exact position they will be whipped in…..simply a poor choice!

Another small annoyance was that we did not get to see Lyen whipped on her ass or back at all. I really do wish Ariel had lashed her on the back side of her body (ass, back & thighs) instead of on only her front in the first round. It really is the best thing for us viewers when we get to observe the victims whipped front and back in the same scene. It was her decision though, and Lyen was still whipped EVERYWHERE on her front, so fans of total body whipping won’t be completely disappointed.

It was indeed a great pity that we don’t get to see an interview after the final scene where the host would be questioning Lyen and asking her if she wanted to continue…..yet anyone who watched the film will instantly be able to tell she wasn’t going to do another round and considering the monster of an ordeal Ariel put her though, Lyen was in far too much pain and probably hysterical……we must make do with simply imagining such a scene. (I really, really was looking forward to it though).

The camera angles were also wonderful here, especially in the second round. Pedro takes the camera and lowers it so we viewers get to see almost the entirety of Lyen and Ariel’s bodies….really enhanced the whipping. (Right then Ariel smiles viciously at Lyen and looks like the incarnation of cruelty). Throughout the numerous rounds, there were plenty of close-ups of Lyens “battle scars” and of her face. Even in round one, where I felt that the position used was not conducive to the punishment, Pedro was still able to capture almost a full-body angle repeatedly…very pleasing!

The position used in round four was also excellent as Lyen’s arms were more stretched out with her arms above her head bound to a metal bar…..it made her look even more exposed than usual and really made her appear even more helpless and not in control whatsoever. Indeed there were five separate positions used in this film and other than the one used on the first round (not bad in of itself….just inappropriate for a frontal whipping), they were all quite satisfactory; so those viewers who enjoy seeing a lady whipped in many different positions will enjoy this film.

Fans of the strap (myself included) will especially enjoy scene three (pussy whipping). Implements are one area where I will take Pedro to task: we do not see much variety in implements. In virtually every recent film, almost every scene features the single-tailed whip. The whip is more versatile (can be used on every body part in one form or another) and does indeed make for nice dramatic overhead swings and delicious sounds as it snaps across the victim’s body; and sometimes we get to see shorter and longer tailed whips in the same movie. Also, many of Pedro’s girls refuse the cane. Still, more variety is needed in his films, 90% single tailed whips does get boring eventually, and the strap for instance produces more brutal marks than the whip. However months ago Pedro indicated to me that we would see some more of the strap so I will hold him to it.

Why should you buy this film? If you want to see a woman pushed to the very edge, to see her pure unadulterated agony….buy it! If you want to see the most vicious domme Pedro has perform her finest work on poor Lyen’s body…buy it! This movie has some of the traumatic and intense crying ever recorded! Again, Rounds two and five are what “made” this film. Indeed as well as that impromptu scene after Ariel cheated, even Pedro himself admitted he was a bastard for filming it.

Final Grade: A
(An absolute must buy for any true sadist) 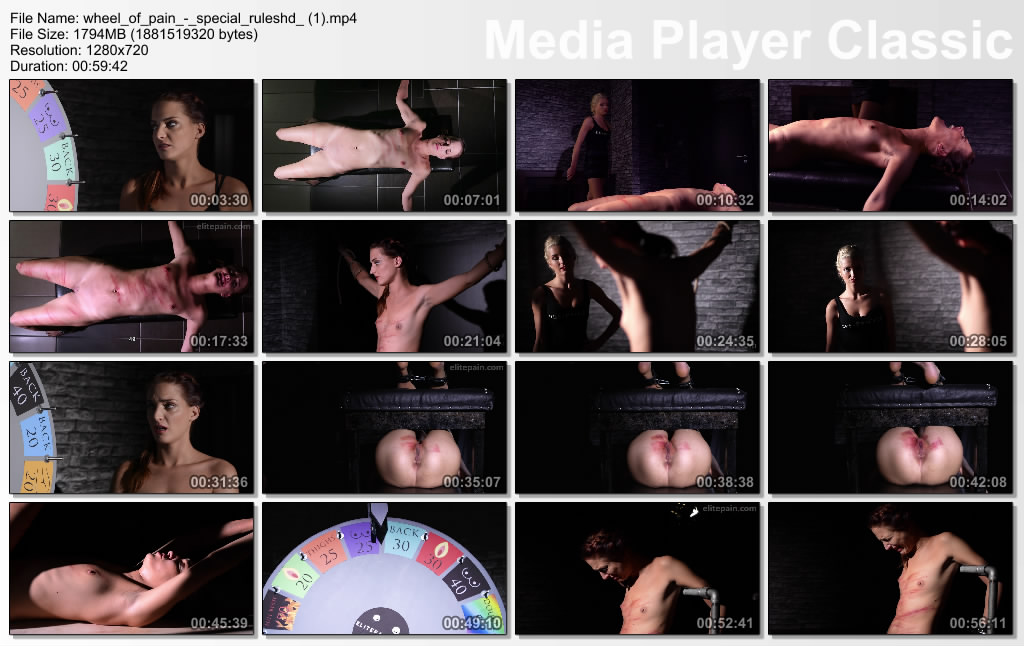