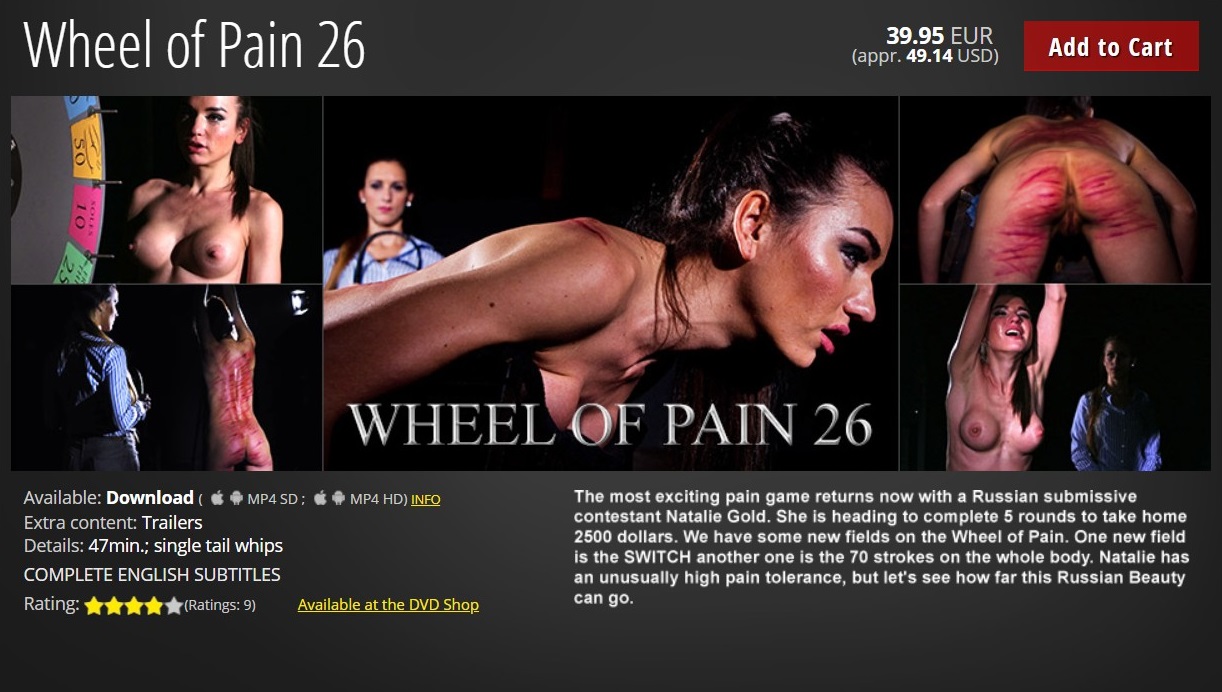 The latest movie of the Wheel of Pain game is here featuring Russian lady Ms. Nataly Gold, who has prior experience in BDSM/whipping. She wanted to complete 5 rounds to earn $ 2500. The rules are the same as always, she must spin the wheel to determine each punishment she must endure if she says “I quit” then no money.

(1): 40 lashes on back, tied to a cross. Her reactions to the whip here are indeed rather muted.

(2): 50 lashes on ass, with a whip, tied facedown. In this round the pain really starts to get to her, tears run down her face and her reactions as much louder.

(3): 70 lashes on full body, whip, Aoh position. This is the round that should have been but wasn’t. Amanda hits her on the back and ass……yet again. She completely ignores the rest of Nataly Gold’s body. A savage whipping, yet we don’t get treated to viewing an entire body (front and back) getting thrashed.

Round 3 was the best one. Amanda lashed her in the two areas where she had already been whipped so Ms. Gold’s suffering truly was compounded by that and her moans and screams were much more intense as a result.

As Nataly Gold does not speak Hungarian, English was the language spoken in this film, the first time that has ever happened. Neither Amanda nor Ms. Gold were fluent in English, so viewers who are interested in the dialogue may have to replay the video a few times to understand. In the future, subtitles are a must regardless of what language is spoken.

Many viewers have expressed dissatisfaction with Nataly Gold, primarily with her facial expressions and emotions…….they were correct. The point that must be stressed however is that her vocal reactions were certainly not muted. Especially in the first round as her back is lashed by Amanda ……….her rather high-pitched rapid breathing and the way her body shook and twitched after each lash as well as the desperation and exhaustion in her eyes, especially as it was only twenty strokes into the first round and she had a long way to go… Also in the third round, in the AOH position, she was practically jumping up and down at times after each lash…..unrestricted positions (where not every limb is totally strapped down) are quite necessary for a whipping film. It really enhances the enjoyment of the victims suffering as you watch them struggle in vain to avoid more whip lashes.

Honestly, if she returns for another film, She should wear a mask, so that only her eyes and mouth are visible. It will in no way make any difference to her facial expressions as they were so limited.

Not bad, very obvious that this was her first time hosting (even if that wasn’t previously known). She, however, did a poor job of explaining the rules…..those who don’t know them already would have been very confused………limited English may have had an effect here…..but for new viewers, she should have explained rules better. The original host is simply the best.

Very good, she hits as hard as ever and shows no mercy. She taunted Nataly Gold during every round, she never did that to anyone except Cleo (who she knew). Many viewers enjoy that and hopefully Amanda continues to do so in the future.

However, in the third round, Amanda stood to the side of Nataly Gold….the side where her face was obscured by Ms. Gold’s shadow…..pity. Many viewers enjoy watching the domina’s face as she does her whipping…..yet for parts of the third round, we cannot see enough of Amanda’s face so as to ascertain her expression.

In terms of film quality: the lighting was as dark, brooding and intense as ever, nothing to distract viewers from the whipping and the sounds of Ms. Gold’s agony. Pedro is a natural with the camera, plenty of good angles and closeups. There was indeed a small editing issue in the third round, yet Pedro has addressed that issue in a very satisfactory manner.

This is the first time we get to see the new Wheel of Pain in action: it is superb. It is truly the product of a sadist; Pedro’s cruelty and malice are on perfect display here, as many of the punishments are redesigned/replaced by ones with more lashes. Depending on what the submissive spins, they may suffer just as severely in 2-3 rounds as they would have in 5 rounds with the old wheel. So if you prefer 5-rounds shows you will have less to be disappointed about as the new wheel is simply more efficient and can present more suffering in a shorter period of time.

In the end, this film is moderately entertaining, the whippings themselves are not painful to watch. If Nataly Gold did not have a face full of fillers this film would have been much better.

The two major issues for this film are as follows:

A submissive marred by plastic surgery, poor English and perhaps some …….emotional/psychological issues were what let this film down. Again, her reactions in the second and third round were definitely more animated and expressive (in part due to Pedro’s insistence), so at least those two last two rounds are worth paying for. It is hard to “fail” a whipping film especially as Ms. Gold took is no pushover and took tremendous punishment. She is no pushover and took tremendous punishment from the No 1 Dominatrix at Elite Pain even though she did not complete so many rounds as she wanted. I cannot blame her totally as plastic surgery and Botox are not criminal, she just needs to learn that it is OK not to hold back your tears and to let your screams loose. I must stress again, that she is a pleasure to listen to when she is getting whipped, it is merely annoying to observe her wooden facial reactions….especially in the first round.

Amanda only whipped Ms. Gold’s back and ass for the entire film. We did not get to see the front of Nataly Gold get whipped…..even when Amanda had the chance. Perhaps she (or Pedro) did feel some sympathy over the breast implant issue. When Ms. Gold asked where she would get hit for that round, Amanda indicated that “he” (as in Pedro) wanted her to strike her on her back and ass…again…disappointing! In the end, it was their decision where to hit her for the 70 strokes, but the film would have been far more entertaining for us viewers if Amanda had alternated between whipping her front and back.

The positions used here were quite good, especially that new wooden cross. I personally loved the second position where she is lying on her belly. That position really allows for excellent close-ups of the victims’ faces… I still enjoyed that even with Ms. Gold’s less than expressive face. The AOH position never gets old, and (more than any other position) really gives us viewers a chance to observe just how severe an effect the whippings have on the victim’s body as they thrash around freely.

Why should you buy this film? If you enjoy a savage whipping in the classic AOH position…buy it! If you do not care for facial expressions and you simply enjoy hearing endless moans and vocal desperation…..buy it! Again, round 3 was the one that made this film worth buying….very intense! 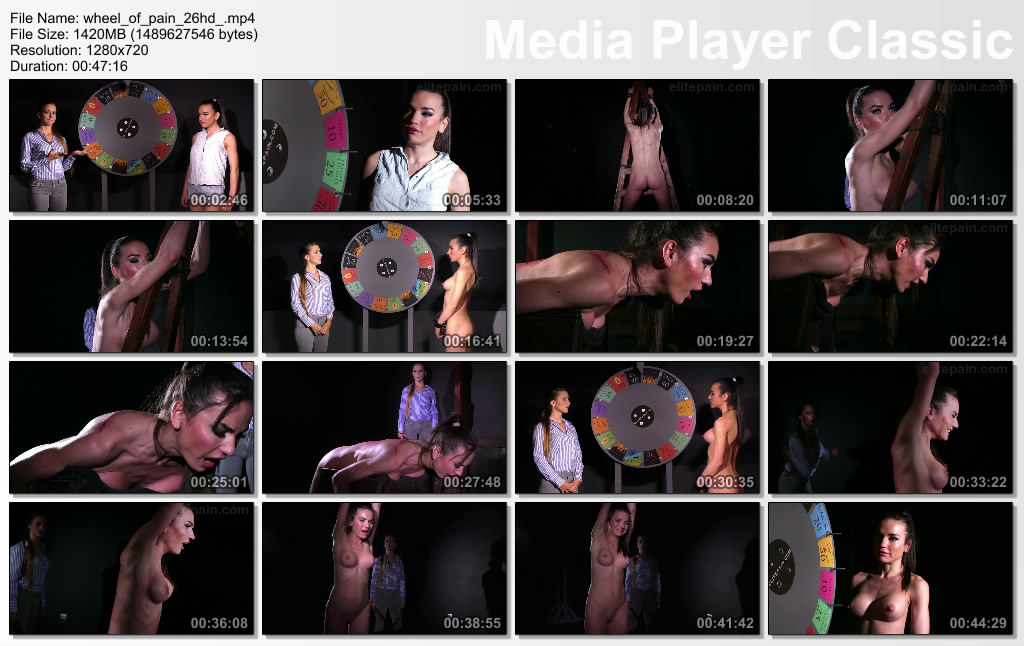