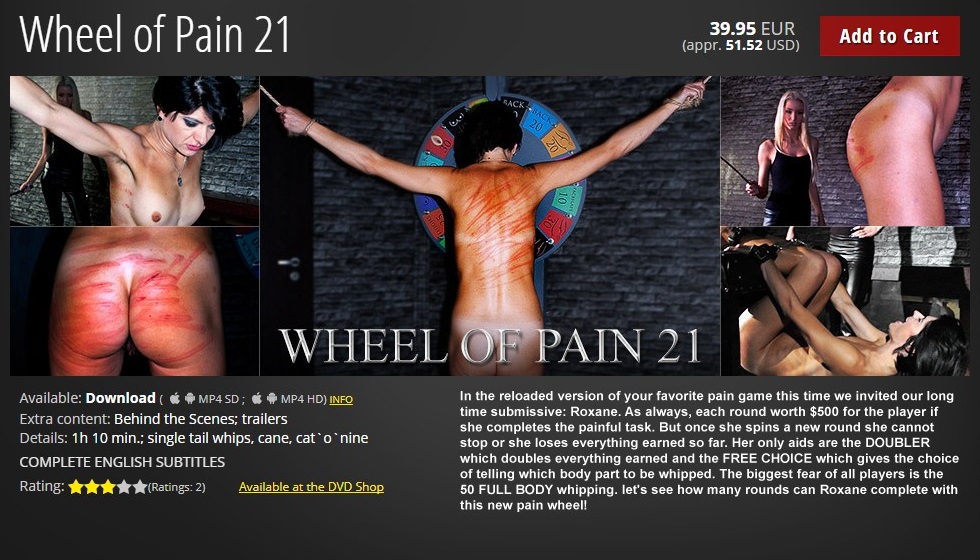 Roxanne, a veteran model, who has been featured, in several other of Pedro’s movies tested herself against the wheel of pain yet again. Standard WoP rules apply here; she must complete all rounds that she spins in order to earn any money. Cleo does the counting in all rounds, she does not whip Roxanne.

(1) 40 lashes on back with a whip. She starts moaning and sobbing within the first 5 lashes and this just gets worse and worse.

(2) 25 lashes on thigh, short whip. This punishment was especially brutal for poor Roxanne.

(3) 20 lashes on pussy, multi-tailed flogger. Many of Ariel’s strokes also hit Roxanne on her previously-lashed thighs, really compounding her agony.

(4) 20 strokes on ass; 10 cane, 10 whip. This was the best round, while Roxanne does not cry and sob like she did in other rounds, you can really see how severe the caning was. After each stroke, Roxanne clings to the post she is chained to like a drowning man hugs a life raft.

(5) 10 strokes on feet, riding crop. After this round is up, Roxanne admits to the host that if she had known how painful the bastinado would be, she would have stopped beforehand.

A terrific WoP episode, highly entertaining from beginning to end.

One factor of importance here was that scenery was minimally darkened as opposed to later films where almost the entire set is dimmed. Dark lighting is indeed a trademark of Pedro’s, it truly does highlight the victims suffering as there is little else to focus on. This is an older wop and all WoP episodes after this one had dark lighting. Of course, this issue may well be negative/positive according to one’s preferences (brighter vs darker lighting). Yet WoP 20 had dark lighting so who knows why Pedro brightened the whole set….possibly so we could have a good view of Cleo? Another positive factor about this film was the variety of implements and positions used: various short and long-tailed whips, a multi-headed flogger and the cane. Looking back at this film, which is around two years old at this point it is indeed a shame that the later WoP episodes are largely-one dimensional in terms of implements. If nobody (besides Roxanne) wants to suffer the cane…fine. Bring back the damn [email protected]!!

An unfortunate part about this film was that none of the punishments here were particularly brutal, indeed 40 lashes were the most amount Roxanne spun in any one round. So for viewers who want to see savage lashings with lots of dark red welts and/or intense crying…..you won’t be so happy. Roxanne’s moaned and yelped in every round, but never ever was she truly broken by the pain. The wheel of pain is indeed a cruel taskmaster, and Roxanne did suffer, yet this was far from the roughest WoP episode we have seen.

The large platform Roxanne was chained to in scene 5, It blocked out the view of her face from the front and most of the camera action was from the sides. Also, her arms were chained up above her but also in front of her, which meant that they too blocked the view of her face. Considering that round 5 was the most painful round for her, it would have been preferable to have a clear view of her face, so as to better appreciate her agony.

The dialogue between Roxanne (the victim) and Ariel (her tormenter) was highly amusing. Roxanne repeatedly referred to Ariel as a “sadist” and “sadist rat,” and also asked her if she was enjoying making her suffer, Ariel seemed to delight in these comments. Roxanne once or twice pleaded for Ariel’s mercy…….if anything that made Ariel hit her even more harshly.

Remember as with all EP films, the WoP is unscripted, all the dialogue was the participants own…no one forced them to say what they did, this was simply Elite Pain at its best. Especially in round 5 after Roxanne calls her a sadist yet again and Ariel’s face goes from icy, haughty imperiousness to sadistic delight in a matter of two seconds!

Ariel’s dynamism and absolute mastery of the whips were on full display here. Especially in rounds 1 and 2 where she really made Roxanne suffer. In those rounds, she leaned in as the whip struck home and put her full body weight into each stroke….very delightful results as she made Roxanne sob and groan repeatedly. Her mix of pure sadism and excellent technique was truly delightful to watch! 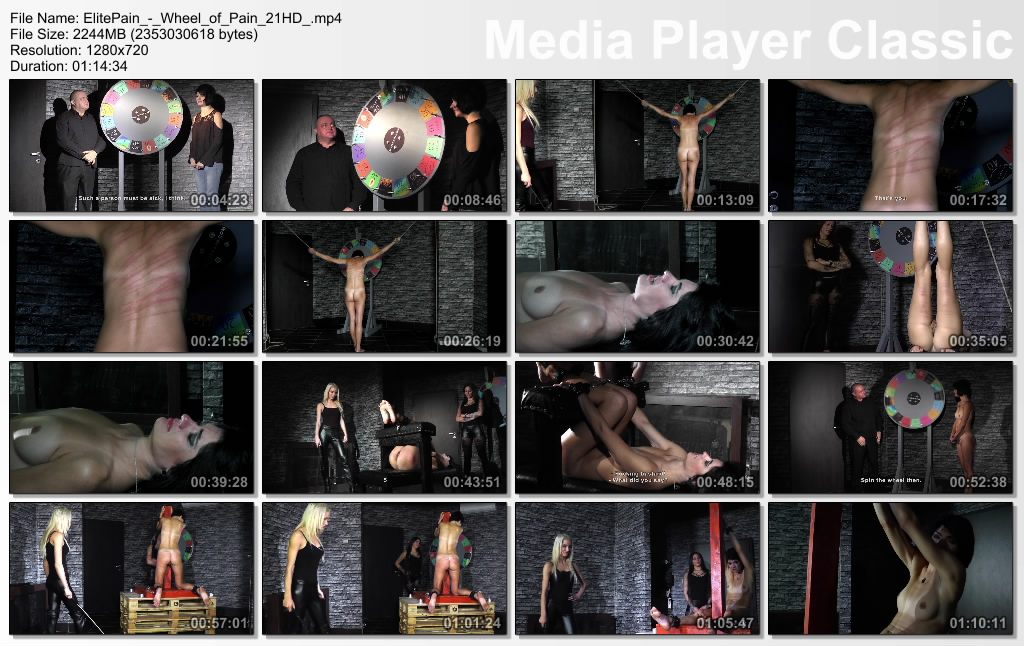