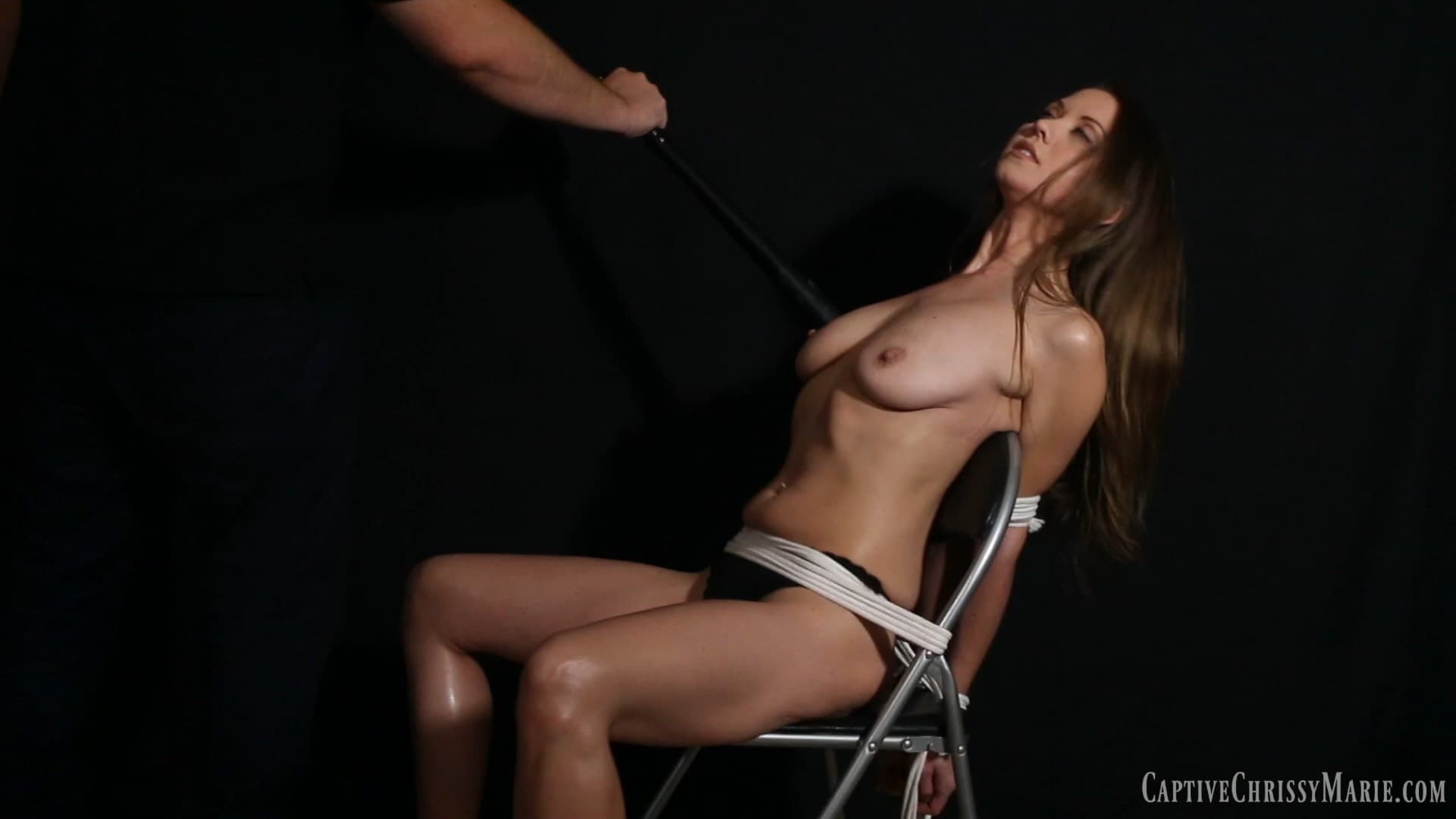 Chrissy is seen dangling from her bound wrists with her face slumped forward and her ribs and abs showing. The villain punches her in the stomach to wake her up. Chrissy wheezes a little, then stares at villain with anger. The villain grabs her by the throat “Chrissy Croft. You stole my emeralds. Where are they?” Chrissy grits her teeth “what the fuck are you talking about?” Not satisfied with her response he punches her in the stomach, and then backslaps her across the face, making her half spin so we can see her thonged ass, causing Chrissy to grunt with each blow. Villain then grabs her by the hair and pulls her head back while fondling Chrissy with his other hand all over from her boobs down to her crotch, then half spins her around we can now see her ass as he continues to grope her. Villain then pulls out a and runs it down the side of her face, in between her breasts, past her concave navel, and down to her crotch which causes Chrissy to open her mouth in fear. He then grabs the center of her bra signaling that he is going to cut if off (bra removed off screen) so Chrissy is now topless and villain is fondling her breasts forcefully. Creepily he says “very nice. now if you don’t want me to torture your beautiful body, you’ll tell me where the emeralds are”. Chrissy fires back with a wide-eyed defiant stare “you’ll have to do me in”. Villain then punches her in the stomach and then across the face making her half spin. Villain goes off screen as Chrissy dangles and writhes struggling to get free. The villain returns with a single tail whip. He lifts her chin up with the handle as she looks wide eyed at him. tell me where the emeralds are, or I’ll start whipping your skin off.” Chrissy fearfully says “you wouldn’t!” Villain then moves a distance behind Chrissy, winds up, and starts lashing her on the back and ass (simulated) causing her body to writhe, boobs bounce and head tilts back as we see her anguished face with closed eyes after each lash. After 5 back lashes, Chrissy is lashed across her abs and breasts a few time. As Chrissy breathes heavily from the lashing, villain goes right behind her, wraps the whip around her neck and knocks her out.

Chrissy is now tied to a chair, arms over the back of the chair with wrists and elbows both tied together. Villain pulls Chrissy’s slouched head back by the hair, then backslaps her wake her up. “Welcome back” villain creepily says after Chrissy grunts from the blow and angrily looks at him with gritted teeth. She starts struggling against her bonds as the villain aggressively gropes Chrissy’s tits and pinches her nipples, while saying “Are you going to tell me where the emeralds are? Or am I gonna have to keep punishing this body”. Chrissy responds “Keep dreaming” before villain slugs her in the stomach. Villain then takes the opportunity to grab her with one hand by the throat, choking her, making her gasp as her eyes widen. “Wanna try that again?”. As Chrissy struggles to breathe she manages to spit in his face and he lets go of her as the spit gets in his eye. Chrissy tries to catch her breath when the villain backslaps her again for spitting at him goes off screen as we see Chrissy continue to struggle. He comes back with a baton. “Tell me where the emeralds are!” Chrissy grunts back “fuck you!” which villain responds to by hitting her with the baton on her inner thigh. He then uses the tip of the baton to bring her chin up. Chrissy angrily stares at villain. “I can do more with this besides hit you, so you better tell me about the emeralds now” he says. “I’ll never tell you” Chrissy says defiantly. Villain then uses the baton as a cattle prod, jamming one end into Chrissy’s ribs. The shock causes Chrissy’s head to fly back as her body writhes violently and her back arches and breasts bounce. Villain eventually stops the electrocution and laughs as Chrissy wheezes, eyes wide with surprise, as she tries to catch her breath. Villain again brings her chin up with the baton/prod. Chrissy again stares at him but now the defiance is mixed with fear. “Well?” villain asks. Chrissy nods no. The frustrated villain jabs the prod into Chrissy’s right tit, causing another head tossing, back arching convulsion. After the villain stops this last shock, he brings her chin up again, but this time, Chrissy looks at the prod wide-eyed with fear. He runs the tip down between her breasts, down her navel, and stops at her crotch. “That tight pussy is about to get lit up where you’re going, so let me start it off!” Villain then shocks Chrissy in the pussy, causing another head tossing, back arching convulsion until her body goes limp.

Chrissy is now nude, hogtied and cleave gagged on the floor. Villain is talking on the phone with his boot on her thigh. “Croft took a hell of a beating but didn’t fess up.” He then kicks Chrissy in the back causing her to groan through her gag. “I’m going to hack her devices and see what I can find, but it’s time to ship this bitch to the savages overseas. She’s ready for pickup” villain hangs up and says to Chrissy “You’re gonna perish for not cooperating bitch!” Villain’s boot kicks Chrissy in the stomach, causing her to groan in pain through her gag and writhe in agony. The end. 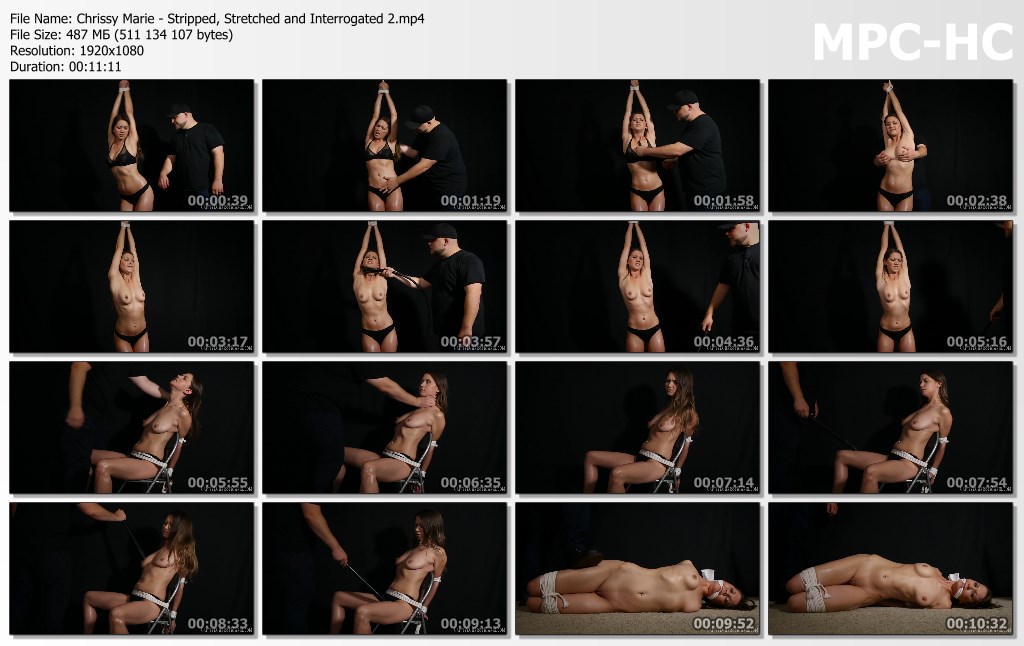